Welcome to my fourth newsletter! I began these letters to keep readers up-to-date on the progress of my new novel, and to tell you a bit about my life. So here is my news, on this rainy day in May.

Well, now I’m into another draft. I once read an interview with Barbara Kingsolver in which she referred to the “many, many drafts.” My heart sank. But it’s not as bad as it sounds! It’s like standing back from a large painting, staring at it, and then removing a bit here, adding a bit there, deepening the tones, and taking out details that obscure the view.

In April, I met with my editors in Toronto, and we talked about out how to sharpen, deepen, and focus the novel, whose working title is now Traveller’s Passage. (“Traveller” is the name of the square-rigged ship.) I have just the summer left before the novel has to be finished. This is an intense time, where one edit follows another, each subsequent run-through becoming less about the big issues (character, or the novel’s underpinnings) and more about technical details, until finally the only issues are punctuation and typos. (Ah, that’s the easy part!)

It’s interesting nearing the end of this long process. The novel feels so alive, so malleable. My characters surprise me. There are still discoveries to be made.

This summer, rather than working in my sauna bath/cabin, I’ll be going over the fields to the log house, since it has running water, a telephone, and a refrigerator. It’s also the place where I wrote the first sentence of Traveller’s Passage, so will be a fitting place to end it. The beavers have abandoned the little pond (or perhaps were eaten by a bobcat), but my granddaughter discovered a muskrat, or otter hole. So I’ll be watching…

Two years ago, I read Tim Flannery’s The Weather Makers, and my husband and I decided to follow his climate change action plan. We’re almost done. The final thing on the list was a solar/wood water heater. The Stanley Waterford wood stove is a thing of beauty, lovingly painted and restored by my husband Peter. On cloudy days, it heats our water. On sunny days, the solar panel on the south slope of the roof does the job. We have plenty of hot water, most exciting! 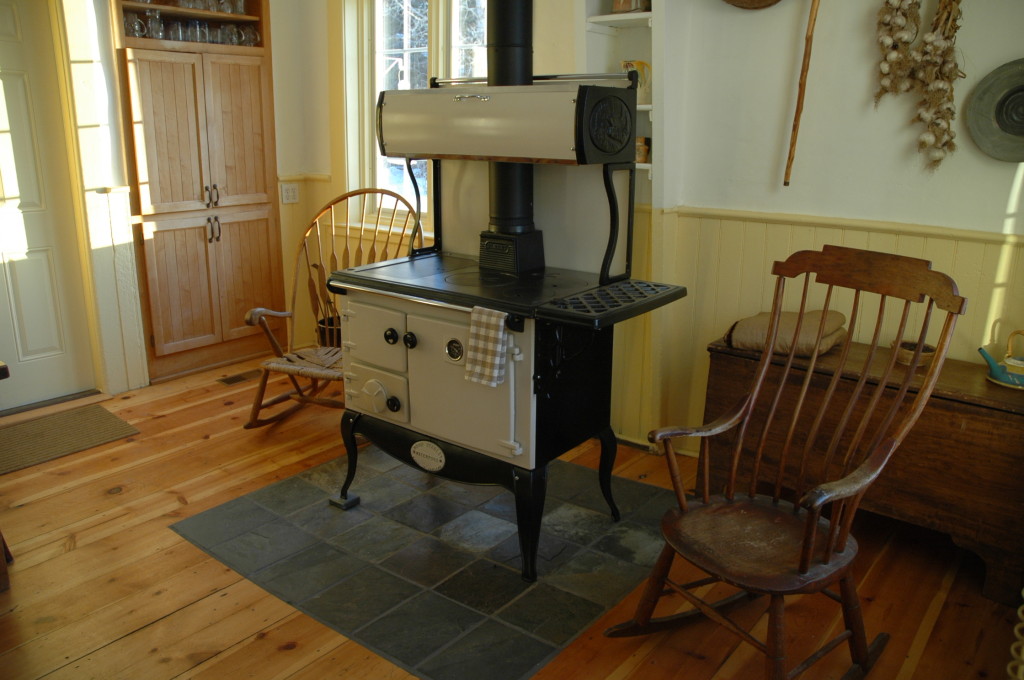 The next stage of the action plan is to grow more food. I’ve always grown much of what we eat, but could do much better. This year, I’ve expanded the vegetable garden, and have planted more strawberries and raspberries, as well as blueberry bushes. I’m also planting beans for drying, and more root crops like parsnips, turnips, beets, carrots, and cabbage. All you have to do to store these plants is to put them in a cool place…no freezing, no plastic bags.

Like so many other people, we’ve have been inspired by the concept of a 100 mile diet. I didn’t buy any lettuce, last winter, but ate local cabbage (shredded, with carrots) and grew fresh lettuce on our sun porch (see below).

Last night, I went out with scissors and cut baby dandelion greens. With new chives and garlic tops, and a bit of oil and vinegar, it was the taste of life – earthy, sweet.

I had the marvelous experience of spending a few days at a Trappistine Abbey in Rogersville, N.B., (LINK) where I met Nova Scotian poets Anne Simpson and Wanda Campbell.

It was late February, in a winter of record-breaking snow. I had a lovely room on a quiet hallway, with two other writers. We wrote, ate our meals in a kitchen/dining area just for us, went cross-country skiing with Sister Kate, who is the guest facilitator, and attended Vespers or Compline.

There are only eight nuns at the Abbey. I was deeply moved to have the priviledge of hearing their pure singing, and listening to their deep, strong reading voices. It is a marvelous place for women to go for retreats, to write or paint, and to feel part of an ancient tradition, with its patterns of work, prayer, study, and rest.

We skiied. And skiied! Snow followed storm. We would have been buried, had there not been a pattern of warming, after each snowstorm — then rain, followed by freezing, and then more snow.

As for literary events, in April I went to the superb Northrup Frye International Literary Festival in Moncton, with its emphasis on taking authors into the schools (lucky kids!), round table discussions, and readings. I met again with that marvellous group of readers (now my friends) in Fort Myers, Florida. I handed out awards at the “Dear Author Program” for grade 9 students in southwestern New Brunswick, who write to an author whose book changed their lives. I had the priviledge of writing blurbs for 3 novels, and of serving on an arts jury. Next week, I’ll be speaking to a grade 12 class in Hampton, NB. And I am now the proud member of Fredericton’s Black Top Motorcycle Gang, which holds reading raids in the most unlikely locations.

And so another spring comes to Markhamville. We’re keeping an eye out for Mama Fox, who raises her litter of fox pups in the field behind the studio. The warm evenings ring with a chorus of frogs – ringing, galumphing, croaking – and the mysterious winnowing of the invisible snipes. The marsh hawks are cruising along the rivers, and the kingfisher lands on the pond-house roof. A few swallows have returned. There are yellow pools of trout lilies, and drifts of daffodils replace the snow.

For the next few months, I’ll be out in my garden, planting. And at my desk, imagining.

And hope that springs with all its promise has come to you.

My husband Peter and I are dual citizens, so after having both vaccinations, we were able to cross into the US to see my 98 year old mother. What an emotional moment as I walked into her 18th century farmhouse, where she still lives alone. Huge smiles, long hug! My dearest childhood friend arranged a reading and book signing at her home in Maine. "The Sister's Tale", now going into a second printing, is being read all across North America, and I loved being able to talk to an American audience. Here are some pictures of the event. ... See MoreSee Less
View on Facebook
· Share