I heard the first two sentences of this book in my mind: The coyotes are newcomers. Several years ago, they moved into the forests above our farm. When I wrote them down, I felt that I had finally found my voice. This book, my first, came after a long period of frustration with writing, after which I took up a camera. Oddly, it was the camera that brought me back to writing. I loved closely-focused studies of things like spiders and the veins of leaves – yet it was the human relationship to this wordless world that fascinated me. I arrayed my slides on a light table and studied them – what did they say to me? The shape of “Home” (originally published as “Seeds of Another Summer”) became to resolve, and I saw a a book comprised of both photographs and writing that would be the story of my coming to New Brunswick, my youthful dreams of “the wild”, and my apprenticeship in learning its truths. This book is very close to my heart.

I would never have written this book had it not been for my agent, Jackie Kaiser, and my son, Jake Powning. Both intimated that I “had” to write the book. Jackie understand how other grieving parents needed such a  book; Jake, a wise young man, realized that I needed to write it for myself. It was a subject I had never spoken about, even to my own family. From Shadow Child: “We fold the death of our baby into a handkerchief that we stuff to the very bottom of our pockets.” The book’s title came to me, instantly, as did its outline. The writing of it was a different story. I would wake in the night with my shoulders aching, as with an actual burden. I excavated memories; I dreamt, vividly; I scoured the pages of my diaries; I interviewed my family. It was a new birth, the birth of the child so long shadowed,  brought forth into the clear light of understanding.

I spent several years happily writing short pieces for The New Brunswick Reader, a now-defunct but then-lovely literary journal tucked into Saturday’s Telegraph-Journal. I would walk our woods, rivers and fields, carrying my camera, tiny notebooks, and a pencil. The essays were usually the issue’s centre-fold, a large photograph of frozen waterfall or spring flower surrounded by text. Eventually, I gathered the essays as a collection. When Diane Martin, senior editor at Knopf Canada, saw the manuscript, she was delighted, but realized that to make a compelling read they must be driven by a human story. What I had thought would be a slam-dunk turned into an intense exploration of what those little nature essays were really saying to me. Edge Seasons, with much soul-searching, took shape.

My first novel, The Hatbox Letters, is the book I have wanted to write ever since I was a child. I grew up in a New England town, playing in the houses and barns that had been in my family for many generations, a place of attics, gardens, orchards; a grandfather who kept bees; a grandmother who made applesauce and tended beds of nasturtiums. The book was born from a period of my life when I saw the passing away of beloved people and places and felt the need to capture the essence of an era. I struggled with this theme for many years, until one day, digging through a chest in my parents’ barn, I found a sealed envelope addressed to my father’s grandfather. I took it to my father, who upon opening it found a death certificate, and learned the truth of his father’s sister’s death at the age of 8, a subject so painful no one had ever spoken of it. This, and other family secrets, clarified the true emotional underpinnings of my own family. It was not until I could let go of my glorification of the past and see its truth that I could write of it.

This novel began as an entirely different story. I began writing a contemporary novel about a single woman – a scientific illustrator—who was spending the summer on the Bay of Fundy, making drawings of snails, seaweed and wildflowers for a field guide. I imagined that a lonely little girl had been sent by her preoccupied parents to spend the summer with the illustrator, her aunt. While at the Banff Centre, doing research for this novel, I pulled a book from the shelves of the public library entitled “Women at Sea in the Age of Sail.” It was filled with astonishing true stories about women on the Bay of Fundy who accompanied their captain husbands to sea. Reading about horrific storms, mutiny, shipwreck and death, I was captivated and astonished. “The Sea Captain’s Wife” was born. 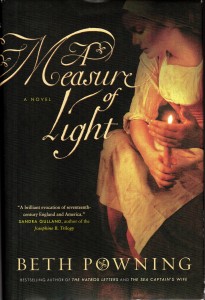 A Measure of Light

It began in a Toronto hotel room, reading an article in The Globe and Mail about the York Retreat, a farm for mental patients conceived and run by Quakers in eighteenth-century England. Although I grew up a Quaker, I had never heard of the place. Intrigued, I began to see the shadowy shape of an historical novel taking place in the Yorkshire asylum—until, in the course of my research, I stumbled across the story of a woman who had come from England in the great Puritan migration, and had later become a Quaker. Her name was Mary Dyer.

I sent away for the single published biography about her (Mary Dyer by Ruth Plimpton) and began researching. As I studied, I began to see similarities between Mary’s life, 355 years ago, and my own. I knew the feeling of being torn between two countries; I understood childbirth loss; and I knew Mary’s New England—as a child, I had played in fields cleared by English settlers. And, most importantly, I had grown up imbued with strands of both Puritan and Quaker sensibilities: the Puritanically unadorned Congregational Church where I sat with my father’s family; yet, also, my first experience of Quaker Meeting, when I went with my mother to a room filled with many clocks ticking in the silence; and was taught to seek for the “inner light – that of God in every man (sic).”

My epigram for A Measure of Light comes from the Dutch philosopher Baruch Spinoza—“I have laboured carefully, not to mock, lament, or execrate, but to understand human actions…” Where history could shed no light on Mary’s life, I had to create a story for her; she would not let me go until I understood.

Peter and Beth Powning (yes, really…) at Sarah Lawrence College, 1969. 53 years ago, we met on a blind date engineered by Barbara Kolsun. I was a theatre major at Sarah Lawrence (later changed to Creative Writing) and Peter was studying Visual Arts at the University of Connecticut. We think of October 11 as our real anniversary. Photo credit to my then roommate, Linda Rhodes. ... See MoreSee Less
View on Facebook
· Share

“Autumn is like a long, deep breath drawn after some endeavour of long intensity.” From my first book, “Home”, Goose Lane Editions. Squash pie. Thanks to soil, sun, rain, the miracle of seeds. ... See MoreSee Less
View on Facebook
· Share

atlanticbooks.ca/stories/september-2021-top-five-local-sellers-from-chapters-coles-indigo-in-each...So nice to be in the top 5 bestselling books in New Brunswick! And delighted to share the fiction with my friend Gerard Collins. Now let's see both of our novels as films...you never know! ... See MoreSee Less

Today is National British Home Child Day. By a motion passed unanimously in the Parliament of Canada, this day is set aside to remember the over 100,000 children who were sent from Great Britain to Canada in the late 1800's and early years of the 20th century. Today, there are over 4 million descendants of these brave children. Researching my novel about a home child, "The Sister's Tale", my heart ached for these kids. Little girls and boys with no parents to hug them, and often no siblings, either. ... See MoreSee Less
View on Facebook
· Share

I am so honoured to be recognized by such a fantastic university as Mount Allison! Thank you, Mount A, and I look forward to a wonderful celebration in May!Meet Mount Allison's newest honorary degree recipients. Up next: Beth Powning (LLD ’20)Beth Powning is an award-winning author and an accomplished photographer. She has also written numerous articles and essays that have been included in publications like Chatelaine, the Toronto Star, Canadian Home and Country, and Harrowsmith.She is a devoted volunteer, sharing her time and gifts with many community organizations.Due to in-person Convocation ceremonies being deferred for the past two years, recipients for 2020 and 2021 will be presented with their honorary degrees at planned in-person Convocation ceremonies in 2022. ... See MoreSee Less
View on Facebook
· Share

Check out this bookstore today…and on the 18th! ... See MoreSee Less