A year has rolled by since I last wrote. I remember it as a flickering dream – places, people, feelings.

Last fall, Peter and I went to Canmore for the unveiling of one of his public commissions, “Touchstone”.

Then, back in New Brunswick, the days grew shorter, the snow fell, the rivers froze. Winter, with its challenges, beauty and celebrations, was upon us. 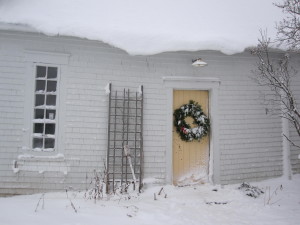 In January, we went to Sanibel Island, Florida, to visit Peter’s father and connect with family.

I spent the fall, winter and spring grinding out the 2nd and 3rd drafts of a new novel. I was asked to be on the Fiction jury for the 2013 Governor General’s Literary Awards. 230 books to assess – I began reading!

By late spring, I had a break from my own writing while my agent, Jackie Kaiser, worked out a contract with Knopf Canada and my novel went to its editor. So I began my 42nd vegetable garden on the same, ever-richening piece of ground – manuring, tilling, digging, planting.

Mid-June. We escaped the blackflies – my brother and I, along with our spouses, took my mother to Bermuda for her 90th birthday. That’s her, way younger than her years, holding up a t-shirt given to her by the friendly bar-owner (in pink.) (Our family is hiding behind sunglasses.)

Always on my mind was my dear father, suffering from Alzheimers, being well-cared for by extraordinary nurses and staff in Westview Health Care Center. Here he is in his sun-filled room, with a bird feeder on the window.

In July, I was invited to go to Ireland to read from The Sea Captain’s Wife at the West Cork Literary Festival. Peter came too. We stayed in lovely Bantry Bay, overlooking the sea.

Mornings were spent roaming the countryside.

Afternoons and evenings, I gave readings,

participated on panels, and listened to presentations from authors such as Mary Robinson, Kate Mosse (pictured above) and Anne Enright.

Meanwhile, the gardens flourished. We arrived back home and the harvest began.

In August, I harvested 90 pounds of wild blueberries from our own hills.

On September 8, 2013, my dearly beloved father, Wendell Davis, passed away peacefully at the age of 92. That’s him, the little one, with his brothers. They are in front of the house I called “Shepton” in The Hatbox Letters.

Much of our family spent the days of his slow, gentle departure camped in his room. We celebrated his life in the Hampton Congregational Church. His great-grandchildren became the 8th generation to sit on the old, butter-smooth pews.

Flowers from friends, presence of family, silver-edged clouds and the crickets of September sweetened our sorrow.

I flew straight from my childhood New England home to Ottawa. After a gruelling day, forced to eliminate by hairs’ breadths of excellence, we on the jury determined upon five outstanding books. Only one will receive the Governor’s General Fiction Award: that book will be announced in November.

This week, as the nights are frosty and the gardens are put to bed, my manuscript will arrive covered with editorial notes and I will begin the fourth draft. I’ll keep you posted more frequently as this latest dream resolves itself into a book and nears publication.

So I find myself in an edge season. There is a new space in my life. I go to the phone and realize my father will never again be on the other end. Spring’s promise, however, has been fulfilled. And winter’s peace beckons.

Come to lovely Sussex, NB, on the last weekend in May for a fun launch of "The Sister's Tale" at the Sussex Drive In! Costumes, free cookies with book purchase, on-stage interview, reading and Q and A, prizes. 3 PM on May 29. Admission free. Put this on your calendar and join us for a wonderful time. I can't wait to see you! ... See MoreSee Less
View on Facebook
· Share

I'm thrilled to announce that my new novel, "The Sister's Tale", (pub date May 25) will be produced as a audio book. It will be read by Martha Irving, award-winning actress. Based in Halifax, you may have seen her on the Neptune Theatre stage, or in many films, including "Lizzie Borden," "The Child Remains", or "Heart of a Stranger." Here she is, making the world of "The Sister's Tale" come alive: she will become Flora, Josephine, Ellen, Jasper...I can't wait to hear it!Here's a link to preorder.www.penguinrandomhouse.ca/books/625352/the-sisters-tale-by-beth-powning-read-by-martha-irving/978...#thesisterstale#PenguinRandomCA#homechildren#amwriting#knopfcanada ... See MoreSee Less
View on Facebook
· Share

Here’s some of what I’ve been reading. Memoir, essays, short stories and novels. I’ve been to India, Shakespeare’s England, the US, B.C. Wonderful books, all of them. Anyone have recommendations? ... See MoreSee Less
View on Facebook
· Share

www.youtube.com/playlist?list=PLXVwGT-1oYca1j5mBHbOZGXzSMC4TFuFkAuthor Genevieve Graham realized, back at the beginning of the pandemic, that she would have to get creative about marketing, both her own work and others. So she started a marvellous blog of chats with authors of historical fiction.My chat about "The Sister's Tale" will appear on May 25. I will be reading the first chapter. I'll post about it closer to the date.Genevieve is the author of "The Forgotten Home Child", which remained on the bestseller list for months!Check out her blog! ... See MoreSee Less

This is the very first place I was published. Around 1973. I remember standing in the windy pasture, gazing at the page, feeling that my life had changed. Thank you, Antigonish Review, for starting my journey. ... See MoreSee Less

I'm so pleased to be on the Authors Book Club face book page, connecting readers and authors in Canada! ... See MoreSee Less