Welcome to my newsletter. That pile of drafts I’m staring at has now culminated in a new novel, A Measure of Light, the story of a 17th century woman named Mary Dyer. She is a real but mysterious person, who went from London to the wilds of the New World and met Anne Hutchinson on the narrow streets of Boston. The novel is in production, and will be published by Knopf Canada March, 2015. The pile is a bit taller, now….

My last newsletter left off just a year ago, when my beloved father died. I flew directly from his memorial service to Ottawa, where I served on the jury for the Governor General’s Literary Award. It was a fascinating, gruelling day, spent with two other authors, and we accomplished the difficult task of choosing five exceptional books from over two hundred submitted titles.

We had storm after storm. Nothing was to be seen out the windows – for days – but veils of icy snowflakes, glooming trees.

So we skiied: and replaced the bathroom. Plaster dust, and general chaos. I was awaiting the next edit, so I did the painting. The new bathroom was well-worth the effort.

I participated in WISP, Writers in the School Program, and talked to high school students in Sussex, Saint John and Moncton. As you can see, they were excited and welcoming. These kids in Sussex were still in a glow over a surprise visit from Stephen King….

Sonya Malaborza translated The Sea Captain’s Wife for Editions Perce-Neige. Here we are at a Frye Festival sponsored event to launch the book. I read in English, then Sonya read the same passage en francais.You can find La femme du capitaine in bookstores and on-line. 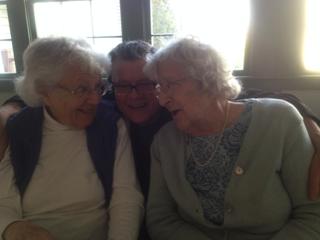 Early spring…we travelled south to visit my guitarist brother, Mark Davis, and my mother Alison Davis. That’s my “other mother,” Leila Ostby. These two are in their nineties and give me faith in life’s possibilities. That is the house where I grew up. It is so old that every floorboard creaks, and the windows bear the ponty marks of hand-blown glass. My mother still lives there, surrounded by dairy farms.

Finally! After the town of Sussex was flooded, and our own little community was cut off from the outer world by swollen rivers, soft air arrived, along with peepers and fiddleheads. Our granddaughter is exultant on the swing, the poplars glow like candleflames and all those bulbs buried beneath the snow yield their wondrous, soft-petalled blooms.

I spent many summers of my childhood in Bermuda at my grandmother’s house. So we go there again for my mother’s birthday. June is the time of flowers: Poinciana trees, hibiscus, oleander.

Summer is hard work and not quite as idyllic as it might look. We have lost our bats and most of our swallows, and now we know how many blackflies they must have eaten. I have to wear a bug suit to work in the gardens, a sign of changing times.

But there are no black flies by the sea. Peter and I and our two granddaughters spent a week in Seaside Cottages, St. Andrews. That’s a view from the window; sunset from the deck; and reading, which we did most of the time, when we weren’t riding our bikes.

Here is our garden, now in the quiet time – not yet frosted, yet somehow still. And the next excitement for me is a new edition of my first book, which was originally published in 1996. Goose Lane Editions is bringing out a gorgeous new edition on October 7. It will make a lovely Christmas gift. With my photographs and text, it tells the story of how Peter and I found this valley, and, in slow increments, learned its truth.

I’ll keep you in touch with the progress of A Measure of Light as it nears publication. I’m on my way to Canmore to promote Home. I’ll be reading at Café Books on Thursday, October 30. I’ll be in Moncton, Fredericton, and Saint John, too. All dates are on my website, www.powning.com/beth. I’d love you to join my Facebook Author Page – https://www.facebook.com/bethpowningauthor.

Autumn is poignant, as regret balances anticipation, and rest forges renewal. For me, it is my New Years, far more so than in January! May you find fresh starts, hope, and good companions.

Peter and Beth Powning (yes, really…) at Sarah Lawrence College, 1969. 53 years ago, we met on a blind date engineered by Barbara Kolsun. I was a theatre major at Sarah Lawrence (later changed to Creative Writing) and Peter was studying Visual Arts at the University of Connecticut. We think of October 11 as our real anniversary. Photo credit to my then roommate, Linda Rhodes. ... See MoreSee Less
View on Facebook
· Share

“Autumn is like a long, deep breath drawn after some endeavour of long intensity.” From my first book, “Home”, Goose Lane Editions. Squash pie. Thanks to soil, sun, rain, the miracle of seeds. ... See MoreSee Less
View on Facebook
· Share

atlanticbooks.ca/stories/september-2021-top-five-local-sellers-from-chapters-coles-indigo-in-each...So nice to be in the top 5 bestselling books in New Brunswick! And delighted to share the fiction with my friend Gerard Collins. Now let's see both of our novels as films...you never know! ... See MoreSee Less

Today is National British Home Child Day. By a motion passed unanimously in the Parliament of Canada, this day is set aside to remember the over 100,000 children who were sent from Great Britain to Canada in the late 1800's and early years of the 20th century. Today, there are over 4 million descendants of these brave children. Researching my novel about a home child, "The Sister's Tale", my heart ached for these kids. Little girls and boys with no parents to hug them, and often no siblings, either. ... See MoreSee Less
View on Facebook
· Share

I am so honoured to be recognized by such a fantastic university as Mount Allison! Thank you, Mount A, and I look forward to a wonderful celebration in May!Meet Mount Allison's newest honorary degree recipients. Up next: Beth Powning (LLD ’20)Beth Powning is an award-winning author and an accomplished photographer. She has also written numerous articles and essays that have been included in publications like Chatelaine, the Toronto Star, Canadian Home and Country, and Harrowsmith.She is a devoted volunteer, sharing her time and gifts with many community organizations.Due to in-person Convocation ceremonies being deferred for the past two years, recipients for 2020 and 2021 will be presented with their honorary degrees at planned in-person Convocation ceremonies in 2022. ... See MoreSee Less
View on Facebook
· Share

Check out this bookstore today…and on the 18th! ... See MoreSee Less